Ether Scan | Transaction Hash: 0x6627d3a415b…
The idea to make the NFT for Standing Floors single was first imagined late last year when seeing the rising popularity of the CryptoPunks. So, we began experimenting with the idea of what if we could make an animated GIF of myself, but instead make it actually do something, interact with my fans while they listened to our new EP. The result went way beyond a static visual and we developed a first of its kind immersive Augmented Reality (‘AR’) app on Instagram which embeds the Wilsonn avatar into music listeners real world. The AR app will drop simultaneously on Instagram with the NFT drop on monegraph.com/wilsonn-standing-floors.

“Standing Floors was written for the Warriors of this world. The outcasts, the dreamers, the ones who do not take no for an answer…the ones that are never afraid of failing in order to grow!”

– Wilsonn
All listeners of Standing Floors will be able to use the AR Instagram app, record their experience and share with their friends.

All listeners of Standing Floors will be able to use the AR Instagram app, record their experience and share with their friends.

Each song on the 5-track EP will release a tailored AR Instagram app for listeners everywhere – the first one is “Standing Floors” on May 28th, 2021.

Each song will release an exclusive NFT containing the unique Wilsonn avatar together with embedded experiences recorded from fans, Wilsonn himself, and other musicians around the world. These will all be packaged into the video experience of the NFT.

Purchasers of Wilsonn’s NFTs will be exclusive owners of the collectibles and have the ability to unlock access to other high quality media including the making of the NFT, artists statements and performances.

For the music video for “Standing Floors,” Wilsonn created an interactive AR Instagram filter. In an industry first, a collection of user experiences of the filter was wrapped in an NFT which has gone up for auction simultaneously with the filter’s drop.

The filter is certified global, meaning it’s accessible on Instagram world-wide so that people everywhere can participate in Wilsonn’s video. The filter will be used around the world with thousands upon thousands of IG stories being shared by scores of users for years to come.

This unique groundbreaking music NFT records the very first experience of Australian & US artists using the “Standing Floors” AR Filter. So before the filter goes viral, one person will have the opportunity to own the only collectible version of the filter, featuring Wilsonn himself in the flesh wearing his famous Red Tracksuit!

Emerging in 2017, with the release of his Idiocentric mixtape, a five-track project, he has been his R&B/soul-inspired vocals to landmark releases from What So Not, Feki, Touch Sensitive, Sbtrakt & StéLouse, creating a series of unofficial collaborations.

Powered only by word of mouth, Wilsonn now counts The Music Ninja, EDM Sauce, and This Song Slaps as his most vocal supporters. Already garnering comparisons to Brent Faiyaz, Miguel and Daniel Caeser for his unique vocal performance, getting recognition and added to rotation on triple J unearthed radio and clocking up over 400k+ cumulative streams on Spotify, Australian-born Wilsonn is rapidly cementing himself as a rising star of the R&B Renaissance.

The release of the Standing Floors is the first song released with Soul Modern/Universal label of his new 5-track EP album and was produced by Grammy nominated duo Christian Rich, who have produced and co-written records for Drake, Lizzo and Kanye. 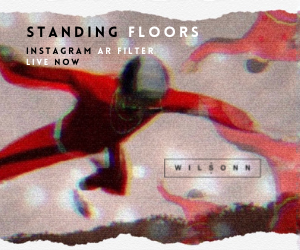 Win a Playlisting Campaign Worth $600 USD